By Cathy Satin on February 3, 2014 in Blog, Speaker History

James Bullough Lansing, an obsessed and depressed genius, invented everything he could including his  name.  In Illinois he was born as James Martini in 1902.  At some point he added the middle name Bullough and for some unknown reason, later changed his last name to Lansing. He moved to Salt Lake City, worked as an engineer, and then began to build radio loudspeakers as the Lansing Manufacturing Company.  He moved to California when sound was being added to movies and became known as the best man to improve movie sound. The company floundered until 1941 when it partnered with Altec Service Corporation- which did movie sound maintenance and repair. Parts became a problem  so in 1946, Lansing left Altec and founded Lansing Sound, Incorporated. Altec Lansing complained that using Lansing impinged on Altec Lansing’s rights so a new identity was created: JBL -James B. Lansing Sound, Incorporated.

May 2012: Take a look at this new video JBL made detailing their history.

The Ohm model “F” speakers invented by Lincoln Walsh feature a single driver mounted vertically as though it were firing downwards into the top of the cabinet, but instead of the normal almost flat cone, having a very-much extended cone entirely exposed at the top of the speaker. This turned normal speaker driver design problems on their head; whereas the normal problem with designing a driver is how to keep the cone as stiff as possible (without adding mass), so that it moved as a unit and did not become subject to traveling waves on its surface, the Ohm drivers were designed so that the entire purpose of the electromagnetic driver was to generate traveling waves that traversed the cone from the electromagnet at the top downwards to the bottom. As the waves moved down the truncated cone, the effect was to reproduce the omnidirectional soundwave, as with a cylinder that changed diameter. This created a very effective omnidirectional radiator (although it suffered the same “planarity” effect as ribbon tweeters for higher-frequency sounds) and eliminated all problems of multiple drivers, such as crossover design, phase anomalies between drivers, etc. However, in practice it was found necessary to use a very complex cone made up of various materials at different points along its length, in order to maintain the waveform traveling evenly.

Cerwin-Vega – From the Beginning

In the last 50 years, Cerwin-Vega has grown from a small group of engineers headed by the legendary Gene Czerwinski into one of the foremost loudspeaker companies. Cerwin-Vega speakers have been used by Pro Audio professionals, Hi-Fi enthusiasts and Mobile Audio fans and has earned an almost cult-like devotion of customer loyalty.

In 1954, Gene Czerwinski, an aerospace engineer, founded Cerwin-Vega. Gene’s goal was to reproduce the live musical experience based on high-efficiency drivers, durability, and a “value for money products.” CV began as Vega Associates and grew when it introduced 18” sound systems that could produce 130dB at 30 Hz.  In 1957 Vega introduced the world’s first solid state amplifier, rated at 125 RMS. The amplifier’s circuit was influenced by a 10,000-watt sonar amp Gene designed for Bendix Corp. In the 60’s Cerwin-Vega became a supplier of loudspeakers and system designs to many major manufacturers including; Fender, Acoustic, Sunn and Vox. In 1974, the movie “Earthquake” premiered with the innovative “Sensurround”. It was the first time audio was  integrated into the movie experience through special effects. The concept required large powerful bass cabinets, which would provide very low frequencies in order to shake the movie theater, thus simulating a real earthquake. For this purpose, the “E” bass horns and woofers were developed. These woofers were 18” versions that were folded into a horn configuration. The internal path length of the horn was 6 feet with a cutoff frequency of 33 Hz. Sensitivity of the system was an incredible 106 dB at 1 watt / 1 meter. “Sensurround” technology and Cerwin-Vega were honored an Academy Award for Special Technical Achievement.

more about the History of CV

A speaker converts electrical energy to mechanical/acoustical energy. It uses a coil of wire, which acts as an electromagnet, set inside of a magnetic gap of a permanent magnet. The following demo shows the main components of a woofer. Holding your cursor over the individual buttons will highlight the respective component. Clicking on the button will bring up a brief description. 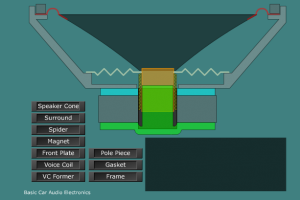 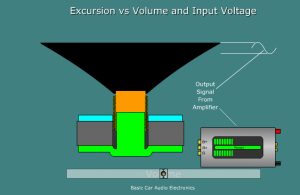