The JBL L100 series speaker was the consumer version of the popular 4400 Series Studio Monitors. It remains one of the most popular speakers due to sturdy construction and high quality components which combined to produce great sound. It was so popular that  a number of different versions made. Here are the parts details: new component and repair parts availability. 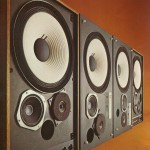 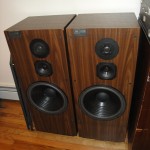 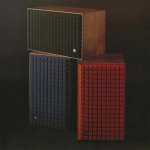 James Bullough Lansing, an obsessed and depressed genius, invented everything he could including his  name.  In Illinois he was born as James Martini in 1902.  At some point he added the middle name Bullough and for some unknown reason, later changed his last name to Lansing. He moved to Salt Lake City, worked as an engineer, and then began to build radio loudspeakers as the Lansing Manufacturing Company.  He moved to California when sound was being added to movies and became known as the best man to improve movie sound. The company floundered until 1941 when it partnered with Altec Service Corporation- which did movie sound maintenance and repair. Parts became a problem  so in 1946, Lansing left Altec and founded Lansing Sound, Incorporated. Altec Lansing complained that using Lansing impinged on Altec Lansing’s rights so a new identity was created: JBL -James B. Lansing Sound, Incorporated.

May 2012: Take a look at this new video JBL made detailing their history.

In the golden olden days of speakers, the issue of whether the first motion of a cone was inward or outward, or polarity, was not uniform. Eventually it became standardized. Most speakers have an initial outward movement.  When JBL started making speakers, they arbitrarily adopted reverse polarity and their speakers had an initial inward movement. This continued until JBL developed their musical instrument series speakers which used ¼” jacks. The use of these jacks required that JBL change their polarity to fit into what had become industry standards. Therefore, many of the older JBL speakers have reverse polarity, while newer models match what has become the industry standard.

Does this really matter” You can equate this to taking a 1 mile walk. It really won’t matter if you start with your left foot or right foot.  Remember, we stock or can order JBL Recone Kits and JBL Diaphragms and a variety of other speaker parts.

JBL has published a technical bulletin regarding this. In it they define the terminology and list each specific speaker and its polarity.

Polarity of JBL Professional systems and transducers: The following is a comprehensive listing of former and current JBL Professional systems and transducers by product category. Within each category models are indicated as positive or negative. The obsolete models included here are those that are still supported by company repair service and spare parts.