Tannoy Ltd, an English manufacturer of loudspeakers and public-address (PA) systems, began in 1926 under the Tulsemere Manufacturing Company. The Tannoy name is a composite of Tantalum-Lead Alloy which is the material that comprises a solid state rectifier invented by the company’s founder Guy Fountain.

During World War II, Tannoy was commissioned to produce and distribute all the communication systems used by British military bases. Due to this, “Tannoy” became a generic term for all PA systems in the British Commonwealth. This lead to the phrase “Over the Tannoy”  which means an announcement made over a PA system.  This generic brand reference continues today. “Aerosmith singer Steven Tyler recently orchestrated an impromptu karaoke session over the Tannoy system of a Californian branch of the Home Depot hardware store, according to staff.” http://www.nme.com/news/aerosmith/49445 and is equivalent to the generic branding of Kleenex or Coke or Velcro that we in the US are more familiar with.

Tannoy is well known for its Dual Concentric speaker design which places the tweeter behind the low frequency driver (co-axially) although Tannoy is not the only speaker manufacturer to design coaxial drivers (Altec and Kef being just two notable examples). The dual concentric speaker causes a natural time alignment of all audible frequencies that must be corrected by complicated networks and filters otherwise. “Unlike ordinary drive units, the Dual Concentric™ is effectively two drivers properly merged into one, where the high-frequency unit is positioned on the back of the low frequency driver to ensure that they are on the same acoustic axis. With this system, the sound energy is propagated from the same point and delivered through the centre of the low frequency cone – a true point source.” http://www.tannoy.com/AboutUs.aspx

This design from the 40’s is still used, admired and highly desired today. 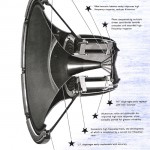